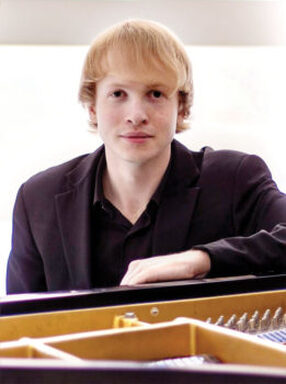 The Robson Ranch Music Club (and Community Choir) is pleased and proud to introduce our wonderful new accompanist to our community.
Director Arturo Ortega was able to obtain the remarkable talents of Paul Lees as a wonderful addition to our choir performances.
You will be amazed at the diversity he brings to each arrangement.

Paul Lees is a distinguished pianist, composer and arranger in the Dallas/Fort Worth area.
In addition to being classically trained, he holds a Master of Music in Jazz Studies degree from the University of North Texas where he was a member of the world-renowned, multiple Grammy-nominated One O’Clock Lab Band.
Among the numerous honors he received at UNT during his graduate studies, Paul was the recipient of a teaching fellowship that charged him with directing the Zebras, a contemporary repertory ensemble at UNT that has performed the music of Weather Report, Steely Dan, Herbie Hancock and Stevie Wonder, among many others. When not on tour, he is frequently in the recording studio, where he has recorded multiple studio albums with various bands, the most recent of which is the One O’Clock Lab Band’s latest album, Lab 2018.
Among the music legends he has worked with are Doc Severinsen, Christian McBride, Jimmy Heath and Sean Jones; and he has recorded with other luminaries such as John Faddis, James Morrison, Bob McChesney, and Allen Vizzutti.

One of the most versatile musicians around, Paul recently collaborated on a soon-to-be-released cinematic video that blends baroque, jazz and popular music. Among the various groups Paul performs with is as a regular member of the Rebel Alliance Jazz Ensemble, a big band jazz group comprised of some of the most talented musicians in North Texas.