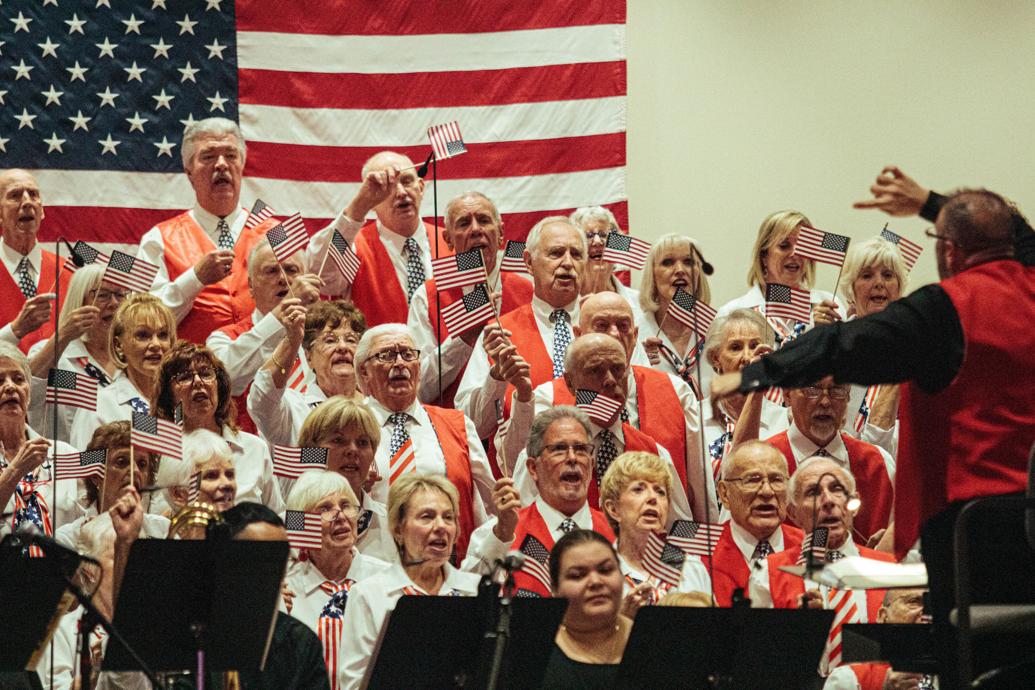 
​Ask any crooner, and you’ll learn that the love for singing never goes away — something the Robson Ranch Community Choir knows well, as it gives older residents a chance to indulge this never-ending passion.
The choir is one of 250 clubs at Robson Ranch, a community marketed toward retirees and people 55 and older. Most members of the choir have been involved with music in the past — through teaching, playing an instrument or singing in other choirs.
Frances Hackley, a choir member and its publicist, calls it a talented group.
“I know it may sound like I’m bragging, but we’re really good,” Hackley said. “We’re not just old folks out here gathering dust. We’re working, and we’re learning, and we’re discovering what we can do with ourselves and our voices. We’re still viable and exciting people who enjoy each other and entertaining these audiences.”
The choir starts rehearsals in September in preparation for its annual Veterans Day concert,
​ which Hackley says is one of the choir’s most important because Robson Ranch is home to over 600 veterans, many of which are in the choir. 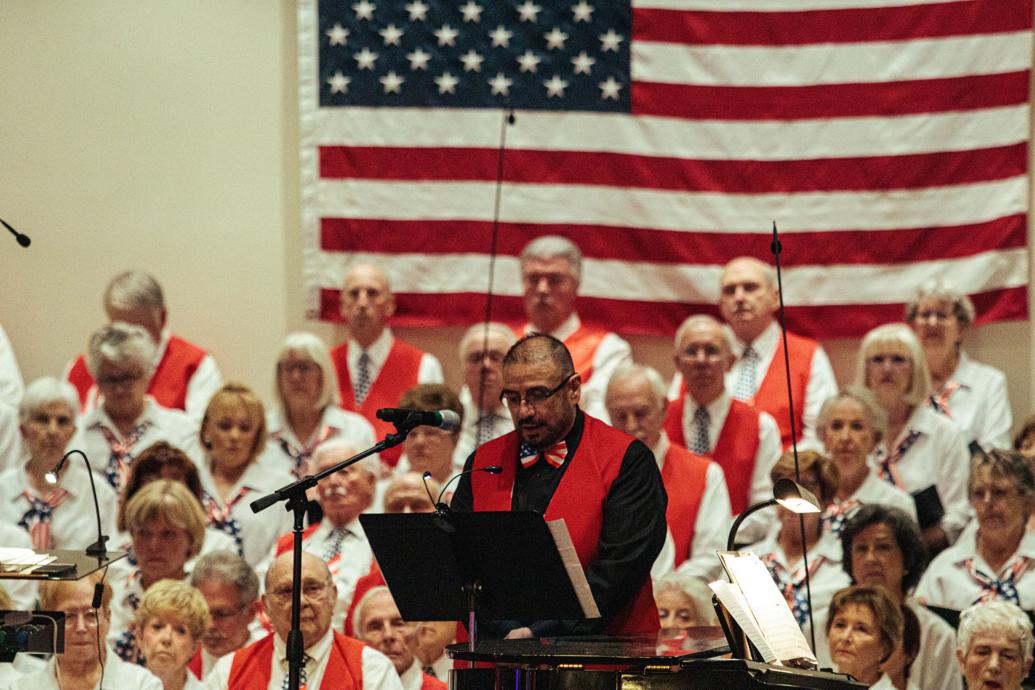 Robson Ranch choir director Dr. Arturo Ortega introduces the annual Veterans Day concert.
​
The choir also performs a holiday concert and ends its season with a spring concert. The director of the choir, Arturo Ortega, chooses the music for concerts a year in advance.
“We’re so fortunate that [Ortega] comes here and directs us old folks,” Hackley said.
Ortega has been directing for 27 years and now works with choirs locally. He has been directing the Robson Ranch choir since 2015. Ortega comes from a musical family and said he was a strange child because he was obsessed with classical music.“I love to shape sound and love to mold it,” Ortega said.
​“Music is everything to me, so I love to mold it and see what I can do with it.”
To sing with the choir, you must audition with Ortega.
“It’s just a matter (of) if you’re good enough, and sometimes people think they can sing, but when they have to get down and learn music and things, it’s a whole other story,” Hackley said. “We can all sing in the shower, but sometimes with other people it’s a little different.” 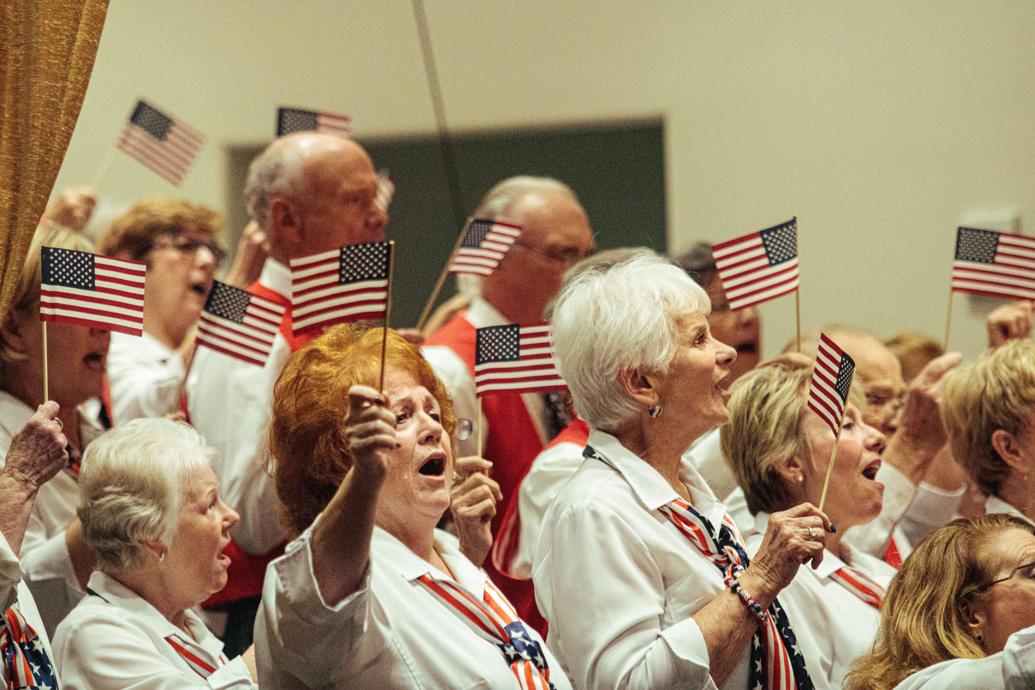 Robson Ranch choir members wave the American flag as they sing “God Bless America.”
​
The choir has a limited number of spots, with a waitlist of people wanting to get in. Despite that, the choir is always in need of male voices. Hackley said men do not typically want to sing for a choir as much as women do.
The choir practices for two hours every Monday evening at the Robson Ranch clubhouse auditorium.
“I put them through the paces, and after two hours it usually feels like we just came back from the gym, but they love the challenge,” Ortega said. “That is something that I truly love about them, they are not afraid of a challenge.”
Ortega said he faces some difficulties because members are not professional voices. He tries to get as close as possible to a professional sound, but he keeps in mind that a lot of the members are doing it for the sake of learning about music and enjoying themselves.
“I always have to find that fine line between something that they will truly enjoy and learn from,” Ortega said.
Ortega said the demographic of the choir makes them unique. 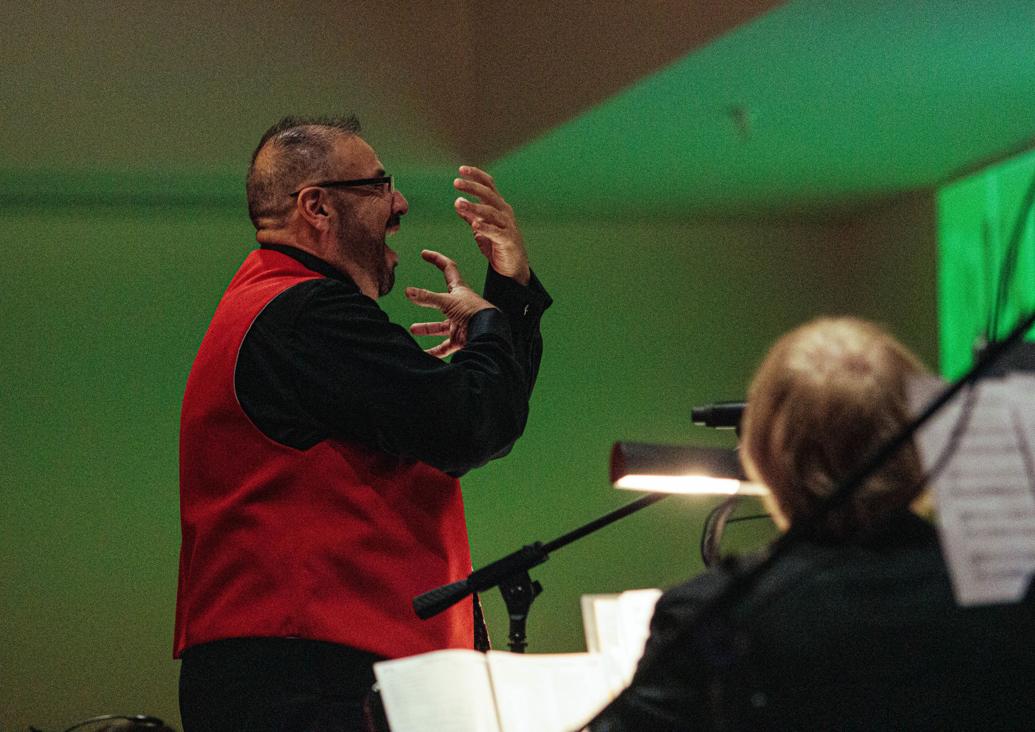 Director Arturo Ortega conducts the Robson Ranch Community Choir on Thursday, Nov. 11,
​during its Veterans Day concert at the Robson Ranch clubhouse auditorium.
​
“[It’s a] very special age group that has an enormous breath of wisdom to embark, and I learn so much from them,” Ortega said. “I think I learn every bit as much, if not more, than they learn from me.”
Hackley said the choir works like a family.
​They all take care of each other and look forward to practices every week.
“This choir brings so much to this community that’s amazing, just with singing,” Hackley said.