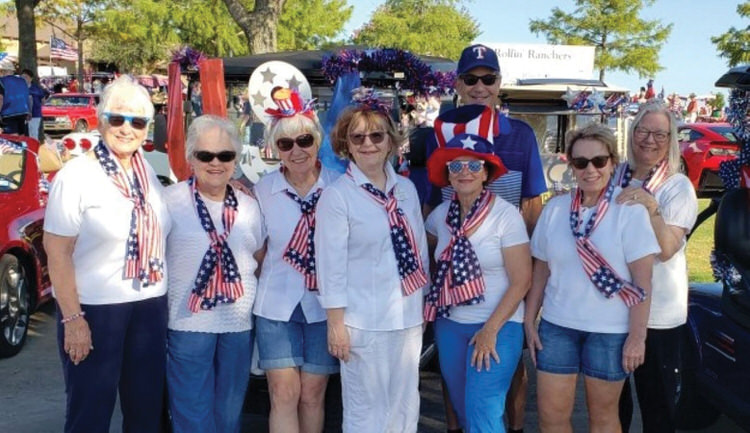 On the spectacular morning of July 4, members of the Robson Ranch Music Club proudly joined in the annual Robson Ranch 4th of July Parade. The club was represented by members Linda Smith, Melba Beckham, Barbara Wilking, Janet Coddington, Frances Hackley, Bill Hackley, Susan Lueders, and Suzanne Horne. Janet Coddington played a recording of the song “Sing,” which was performed at our Spring Concert, while riding in the caravan.
The morning was warm and pleasant, as were the Robson observers.

After the parade, the Robson Ranch Classic Rock Club presented a sizable check to the Music Club for the Borman Elementary Orchestra Community Project before the rock band started playing at the pavilion.
The Music Club decided to help these children afford what they need to get them through the school year in learning an instrument. You can help by going to our website, rrmusicclub.com, and donating via PayPal.

Later that evening, the Denton Community Band played glorious patriotic tunes in the clubhouse ballroom.
The weekend started with the Music Club welcoming folks to the Summer Sizzle Dance on Friday night.
A new band, The K. Ellingson Group, was well received by the partygoers with hopes that they will soon return.

The 4th of July weekend was a busy one for the Music Club, and we thank all who got to join in on our events.
A special thanks to all the worker bees who made the festivities happen, especially Susan Lueders,
Janet Coddington, and our parade riders!

The Music Club’s Community Choir will soon be starting back at the end of August with well-rested voices and charged enthusiasm. The first concert will be our ever-popular Veterans Day Concert on Nov. 11.
Make sure you mark your calendars for that.

Then, let’s not forget Scaryoke on Oct. 28.
This is always an over-the-top, fun, and rowdy event. So, start working on your costumes. Prizes will be given!

On Dec. 17 and 18 the Choir performs their Christmas Concerts.
You definitely won’t want to miss this warm and wonderful concert featuring an assortment of touching seasonal songs.

The club will end the year with the annual New Year’s Eve Dinner Dance on Dec. 31.

Please go to our website, rrmusicclub.com, for all information about the Music Club and their upcoming events.
The Music Club thanks you, Robson, for your support!